April March is very cool and very talented. She’s an animator and a singer, and with “Chick Habit” she covers a number of French Yé-Yé songs, which have a distinctive and catchy sound that is poppy and firmly rooted in the 1960s. While March isn’t from France, she manages to do great versions of the songs that have me tapping my toes. They’re fun whether you speak French of not.

See more about Chick Habit
Posted by Chris Campbell at 3:40 pm No comments:

It’s tough to watch at times, but ultimately I’m glad that I watched it. Hard Candy is built around terrific and ambiguous performances by Ellen Page and Patrick Wilson. The film is very manipulative which destabilizes our emotions and sympathy as the story unfolds.
It begins in a chat room with a screen filled only with text as some flirting happens and a meeting is arranged. Things become much more harrowing from that point on as a man in his 30s meets a girl who is 14. Things do not go well for him after that point in a story that plays on our fears and expectations in surprising ways.
It may be too intense for some people and the entire film often stays on very difficult edge as it spins us around and horrifies us. It’s definitely a film that will provoke discussion and many parts of the film are open to interpretation.

See more about Hard Candy
Posted by Chris Campbell at 7:59 pm No comments:

The Children of Marx and Coca-Cola 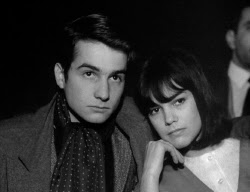 We felt sad. It wasn't the movie of our dreams. It wasn't that total film we carried inside ourselves. That film we have liked to make, or, more secretly, no doubt, the film we wanted to live.

With Masculin Féminin Jean-Luc Godard follows the template of many of his later films in mixing documentary, stylized dialogue and acting, humour, philosophy, cinema, music, imagery, etc, etc, etc. together to create something that at first seems a bit confusing, but somehow starts to make more sense as it goes. Ultimately it results in some powerful combinations and meditations about youth, politics and life. At the core of Masculin Féminin is the division and fascination between politics and the personal, between men and women, between popular and high culture, and between movies and cinema.
Godard's films don't exist outside of a cinematic context and while there is an intellectual framework, it still works within a world of love for cinema that I share. Fun, thoughtful, occasionally frustrating, and ultimately rewarding (as most films by Godard are).
Posted by Chris Campbell at 5:36 pm No comments:

Henry Darger created a massive 15,000 page novel along with huge paintings and incredible details for a world where sisters battled evil to free child slaves. It wasn’t seen or discovered until after he died. Jessica Yu creates a film that interweaves the distinctive drawings with animation and excerpts from Darger’s diaries and interviews with his neighbours to paint a fascinating portrait of a man who was a janitor by day and a secret artist at night.

See more about In the Realms of the Unreal - The Mystery of Henry Darger
Posted by Chris Campbell at 10:57 pm No comments:

Spider-Man is Back and is Darker (rated 4 stars)

The opening credits of Spider-Man 3 conveniently feature images of the main actors as well as the main plot points of the first two films to remind us of the context of the film that we’re watching. It’s a neat way to set up the film and prepare us for what we’re about to see. Overall it’s quite enjoyable with quite a clever balance between the big and loud special effects and some good scenes with solid acting between the characters. What distinguishes Sam Raimi from many other directors is that he never seems to lose site of the characters, which is what we really should be interested in with any film.
I liked the characters and the situations, was impressed with the action and I got sucked into the story. We follow Peter Parker as he goes from the top to the bottom and realizes what is important. Who wouldn’t listen to Aunt May or fall in love with Mary Jane? The morality is simple and the film is fun and it’s a very nice way to kick off the summer movie season.

See more about Spider-Man 3
Posted by Chris Campbell at 8:41 pm No comments: