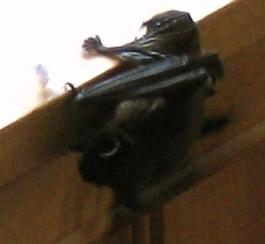 Yesterday a bat flew into the house through the chimney. I found out about it when everyone in the living room started screaming and yelling. I looked in and there was a bat flying around. Everyone was ducking as it came around. We managed to get it into the sun room and closed the doors and were able to watch it. It flew around and landed in various places. The dog was outside the door and she kept trying to get in and get the bat.
The outside door of the sun room was locked, so I couldn't open it from outside. But I noticed that one of the windows was open, so I went outside, took the screen off and then opened the window a bit more. Then we waited as the bat flew around and noticed the open window.
A bat is a fascinating creature. Tiny little claws and wings that fold up. Watching it fly around and try to figure a way out was kind of neat. Having the glass between us and the bat helped. Even though it probably woundn't have attacked me, I didn't want to go in and open the door from the inside. I think that Batman was onto something when he chose his symbol.
Our bat made several attempts to get to the ledge and managed to get a spiderweb tangled on one of it's arms. Then it was able to get to the ledge and pull itself up onto the ledge and then it flew to freedom. It was cute in a slightly scary way.
technorati tags: bat, house
Posted by Chris Campbell at 10:32 am